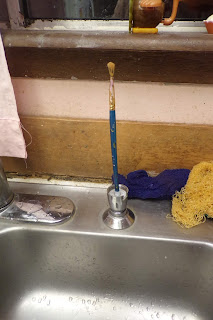 As you know my washing machine is having issue with spin cycle. But this evening as I was rinsing off dinner dishes our kitchen spray decided to be geyser.
Well if Murphy want run up North to one hardware store he could get a sprayer head. But there been a few things we been talking about getting out of Sandpoint.
Which would be a bed spread of some type. Some of you might be thinking why don't make quilt for it.
I wouldn't have clue when I would even get to it.

Went over to Methodist Church for there community lunch. It was rice with some type of chicken sauce.
I left the fruit salad, the dressing look like dairy base. Not good for my stomach. Plus no fun either. 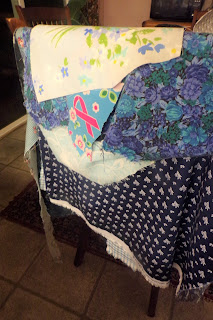 Been working a little bit every day on some crafts. This evening I been cutting strips for an up coming throw quilt. I am calling it a “spotage” quilt.
Sometime I have trouble telling navy blue from black.
About ready to cut some of these blues into width of 2.5 inches and length of 7 inches. I have lot of piece to cut.

Today Is Wednesday January 22 2020, This Is What Happen

Regular day at work. Client had appointments. Next two days there having community lunches and hopeful both my clients can attend. It good for them to get out. Plus it good for all of us to get out.
I just need to consider there mashed potatoes if serve would have diary in it.

Well next week Liz has an appointment in Sandpoint. I am hoping we can go over to Cedar street market and take a fabric collage class.
I recall doing a few collage in past. But mind was mainly out of paper.

Since it longer day. I did put on some of the bias tape around my apron. I have anther package and it looks like I will need purchase more.
I did get a few items out of dollar store. Mainly things for work and T.O.P.S

Coffee is on
Posted by peppylady (Dora) at 8:31 PM 7 comments: Links to this post

Weigh in at T.O.P.S and I was up a little. Not trying to make excuse but I had fairly heavy top on. But even if I had different top on I still would been up, but not as much.
Still under 200 pounds. I have trouble with water and exercise. But calorie count I am happy with.
Looks like I got over 5,000 steps and under 6,000

I been working a little bit on some U.F.P, those unidentified Project. So I cut some more boards to wrap up my smaller pieces of fabric.
Not all my U.F.P is necessary arts and crafts. Toward end of the year I start to go though the basement pantry. 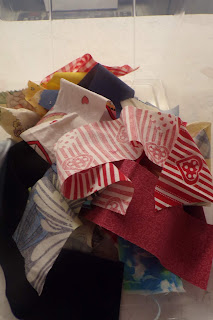 I start to cut strips for anther throw quilt. I am calling it a "spotage" quilt. It's like between I spy quilt and postage stamp quilt.
An I spy quilt is done with mostly novelty prints mostly. There no set size to the blocks or squares.
Then a postage stamp quilt blocks are in the 1 inch range and nothing repeated.
But mine will be 2 inch blocks. Mainly primary colors I will be playing with. But I plan to toss in some other colors also.
So far I have 30 strips cut. 3 of them aren't primary colors and 2 I would consider novelty prints. One is Jack O' Lantern and the other one is Sheep in heart setting saying "I Love Ewe"

Hubby been watching the senate hearing of Trump. It seem the only part you hear on our constitution is the first two amendments. The first one is about freedom of speech and then the second one is about guns.
Well we have 27 amendments, and the other 25 seems to be forgotten.

Posted by peppylady (Dora) at 8:44 PM 8 comments: Links to this post

Beginning of work week, and it also M.L.K DAY . But in Idaho it called IDAHO HUMAN RIGHT DAY
I could go on and on about this and other issues that needs to be addressed. But not today.

Before I went to work I listen to a TYLER OAKLY video and took care of some e-mails. Then I pin on bias type on apron.
Looking at my sewing table I'm trying to figure out, possible more light. But I'm sure I will figure it out.

I got my cutting mat and also straight edge back.

As I was at Work hubby got all the laundry caught up, and we're having issue with spin cycle with a washer. After the wash is complete we need to turn the dial unto the special spin cycle. Also clean out fan above the stove filter, and vacuumed.

Weigh in the morning with my weight lost group. Last thing I ate was plain pop corn.

Coffee is on
Posted by peppylady (Dora) at 6:56 PM 9 comments: Links to this post

There are those people. Nothing can be said other then gasp in horror. Or maybe wonder where the ignorance come from.

Here is a few of the comments she received.

Being educated by the wrong people is the difference........when an 18 year old college kids think Socialism is better than the government we have ......that education is wrong

It's because they don't believe in God, but God is punishing them with the bad-doers. Salvation isn't for the good-doers. God will prevail! Stay the course... 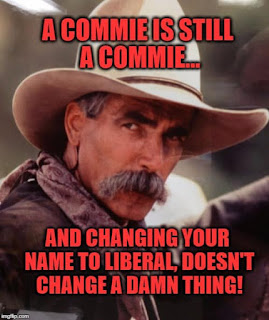 Not all comments were those who think climate change is hoax. But most of those who comment would say it is a “hoax”
I wasn't going to post every response to this. But I just shake my head and wonder how these people come up with there way of thinking. I also why these so called “Anti Liberals” or extreme Conservatives congregate to this area of North Idaho.
I did make a statement I was going to stay away from political and religious base post on facebook. So far so good. Until the 22nd of Feb. We might know who or some ideal, will be on Democratic ticket by then.
But I didn't say I was going to lay low on my blog. 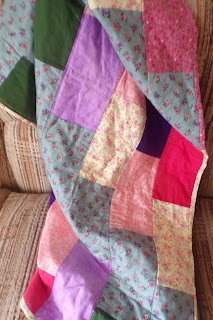 Completed an UFP (Unidentified Projects) a quilt that I believe I started 2 to 3 years ago. Quite please how this throw quilt came out.
Talking about UFP. When I got my sewing machine and want to get hang of it. I stated an apron out of an old sheet. Which I never finished. So this afternoon I stitched around were the bais tape will go.

Next quilt I believe I will be doing is what they call the postage stamp. I don't believe mine would truly be a postage stamp quilt.
The squares are 1 inch in size and no 2 fabrics are used twice.
Maybe it might be an “I Spy” type of quilt. Or combination of two and it called a “Spotage Quilt”
Well I thought of yesterday cutting out my strips to make blocks for my “Spotage Quilt” but I left my cutting matt at a friend place.

Organize a little more fabric, as I listen to Pod Cast of one of the Ted Talks. Stayed with my calorie count, so I feel the day went fairly easy. Which I needed.

Today Is Saturday January 18, 2020 This Is What Happen

Good Golly I couldn't get my tongue and brain on the same page. Plenty of errors like I said I lived in Nevada.
Coffee is  on.
Posted by peppylady (Dora) at 3:31 PM 5 comments: Links to this post

Today Is Wednesday January 15, This Is What Happen

Had every intention to blog yesterday about the going on in my life. But time got away or so one might even say I didn't keep it in tact.

Watch the Democratic debate on C.N.N off lap top and had some issues of it not coming in clearly. So lot of it I missed.
I honestly don't know which of democratic I tend to lean toward. At this point it who can beat Trump, he is different type of leader.
At this point I would say Elizabeth Warren has bit of back bone and could stand up to him. But on the other hand Pete Buttigieg could make Trump look like idiot.
One is Progressive wing party and the other is moderate side of party.
At this point the only one who brought up the POOR PEOPLE CAMPAIGN was Pete, it was briefly. But it was brought up.

As I watch up I stitched the back side of my binding on quilt. Got quite ways on it. Then after that I start to look at "Postage Stamps Quilts" and found one that how color was laid out. It was "nausea" and had trouble getting it out of my mind. Had trouble sleeping.
Then I watch couple of You Tube.

I just took care of basic today. I am sleep on my feet.
But it official I am in division four. These members weigh between 199.75 and 150. Last year I was in division five, simple those who weight more 200 and less 250.
I started January 14th at 198.75
Here is story on the 2018 division four winter...I’ve struggled with my weight for about 35 years. Despite trying, I was unable to lose weight on my own. When I started TOPS I was determined to succeed this time. I kept a cooler in my car, stocked with water and healthy foods. I would take walks during the workday and replenish my body with nutritious foods. I began reading labels and became aware of portion sizes. I tried not to deprive myself of anything. I would allow myself one bite of something if I wanted it—but not more than that.
I walk on my treadmill, weight train, do water aerobics and I’m excited to start hiking this summer. I don’t hurt like I did. I can breathe better and am no longer on blood pressure medicine. I am proud to be a role model for others in my chapter and in my community. I want to encourage anyone who wants to lose weight. It’s really about changing your environment, your diet and really…your life.. She lost 67.20 pounds.