As I was reading blogs last night, it was super windy and then the power went out. It came back on sometime during the night. 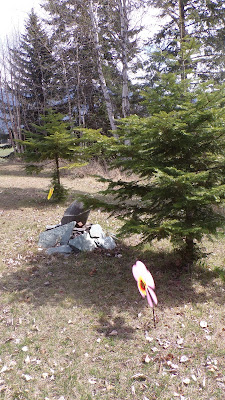 I like to put whirl bird by our trees, last night wind was a little much and two got ruin. But one was repairable. Plus as I was in Sandpoint and I was in the local Walmart and bought four solar lights to go around the place. Known the dollar store also carries them. To my suprise the dollar store was out little solor lights. 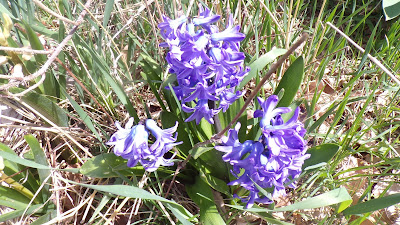 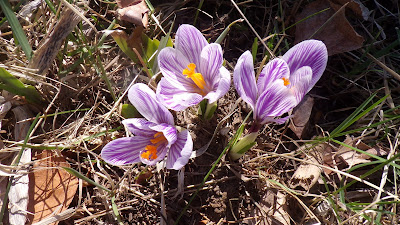 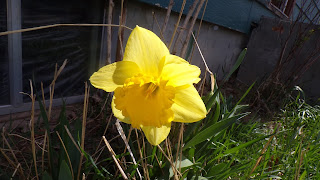 Let me share what going on with flowers. My Easter Hyathis flower are in bloom. They could be thin out. Not sure if I will get chance to. My main focus is to get the flower bed that I call "Royal Sunshine" strighten out. I weed around the bulbs that is coming up. Crocus are done for year. At this time I only have on daffodil in bloom. 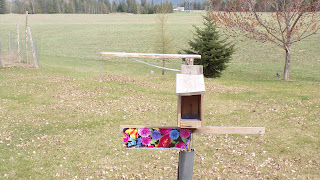 The hummingbirds are back and we doing the feeder different this year. Yesterday we made up the syrup and the feeder leaked. As I was in Walmart I got simple cheap one. Just haven't had a chance to get photo of new set up.

Work been little diffucult. Regis is still trying to get his pain medication by manipulating. Pain medication they don't give out like they use to. Found out when I took Regis into the emergency room he never talk to the emergency room doctor about being mental health crisis. He been cutting him self and to find out he was complaining of pain. He been off morphine  for over a week now. He told that the E.R doctor gave him morphine so he could sleep. Then he also telling people when he was in hospital in Courd'Alene they had morphine in one arm and in the other arm they had codine going. None of this is true. When he believe no one is watching he seems not to have any pain and once he feels or know someone is watching he is in such agony of pain. Not saying he doesn't have pain issue. He med seeking. I got done talking to part of his care team and there thinking either subutex or soboxone. It finding a doctor that will work with him.

Coffee is on and stay safe.