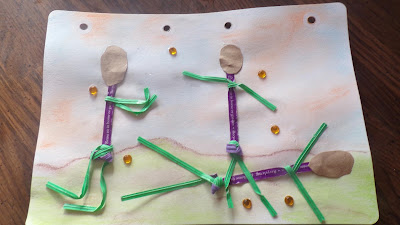 Last week I am sure I didn't take part in PAINT PARTY FRIDAY I have several creative project going on. This one is part of SKETCH BOOK PROJECT in Brooklyn New York. Been working on this for some time now. My theme for rhis sketch book is as planet pluto going though all the zodiac sign. Or one can call it historical or generational themes. This one is as pluto going though Libra, from years of 1971 until 1984. I was getting close to entry my teen years, and pretty much just start out in work force. I entered my working force during the year of trickle down ecomomics. The scales was becoming un balance. This piece was done in oil pastles, twist ties for veggies and meats from store, brown paper bag, and fake gem stones. Question time...What was going on in world at this time...I start seeing my self becoming estrange or different from my family. I see my self as character Lisa Simpson or even Marilynn in Munsters. Like everyone could of made different Choices though our lifes. But I pretty much enter the work force in early 1980's during the time of "greed is good" And my wages pretty much been from $8 to $15 and hour. Which means during my support my self total been I recieves a raise of not quite two cents a year. Confession time...There years I was a stay home mom and didn't work in main force. 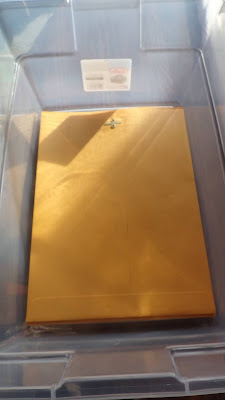 As some of you I been declutter, getting rid of things that have no purpose and organize things. Statement time...It frustartating when you know you have something and can't find it. Well one of problem I had was I end up with per cut fabrics and didn't know how to organize them or sort them. Well not long ago I bought some totes. Had a few envelopes. So I'm sorting the blocks by size and sticking them into the envelopes. It took me well over three weeks to figure ths soluction out.

Last few days healthy habits been on a bumby road, car oil will be change, and off to see my youngest son tomorrow.

Coffee is on and stay safe