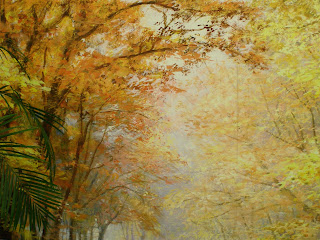 At the beginning of the week I took Quenella down to see the eye doctor. On the way home we stop in at the Bonner Mall so I can take a picture of this mural. I always thought it was bigger then it actual is. 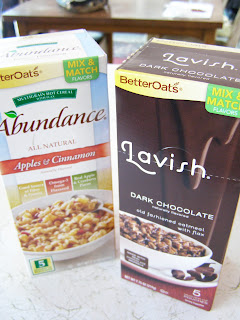 One day at Super One in Bonners Ferry I decided to pick up a new hot cereal because it was on special for .88¢ a box.
Then a little later on Murphy went and got these two new flavors to try.

Next weekend photo theme will be colors  and or fall

I made it though the week. But usual I look forward to work week ending. I figure it out the different between a job and work...Question time....Any thoughts on this. Maybe Sunday I'll post my thoughts on this. 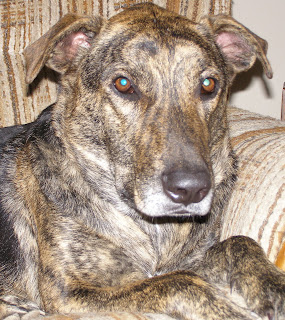 We're watching Bart dog Carson. Nice dog would be a wonderful family pet. Can't say he is the brightest bulb in the group. Maybe some of you are wondering why we got Carson he went to see his girl friend Edna is Portland Oregon and they where planning to see Red Hot Chilli Peppers.

Murphy went out Friday Morning a split wood to bring in the basement. I got the house straighten around.
So together we head in town in the afternoon.
Gas here now is $3.39 a gallon and he put $50 in the pickup....Murphy figures with the going on with Israel and the Palestine who know what will happen....Opinion time...What bunch of bull crap this whole thing in middle east..the dumbshits has never even tried to be civilized...what little selfish shits head they are....Statement time...I'm sure glad I have barely anything to do with any of there religion over there...you know Christian, Judaism, and Muslims...The only I have to do with is simple I know people who follow these teaching....For now I'll leave it at that.

Look like I kind of went on rant...what can I say...it's my blog. I went in the bank and Murphy sat out in the parking lot. Made a deposit and stuck some on the credit card.
Oh I did tell you about our washing machine breaking down. Well it been so long I been in a laundry mat and it use to cost to wash and dry was $10 and that was when we had the boys at home. Now it cost for the 2 of us ten bucks and that's not drying them.

As Murphy was handling the laundry mat I went and did some food shopping. My friend Quenella said she enjoyed angry orchard
I tried the apple/ginger one. Very smooth but strong apple taste but I was looking for bit of nip of ginger...I'm a big fan of ginger but it one of the better tasting apple jack I got from a store. A six pack was just under $8.00.
Editor Note...One needs to be 21 years old to go to there site. 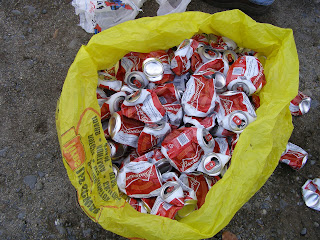 One thing Ellie gives me her empties Budweiser cans so I can recycles them when I go to Sandpoint. Thursday I took out about 25 plastic bag which one receive at the grocery store worth of empties. This isn't even all of them.
For Murphy and I to put down that many beer it would take us a decade. Opinion time...No wonder she has trouble with her electrolyte.
This isn't even all of it.
The reason I recycle is simple I care for planet which I live on. I'm not out to make Money on it.

Last sunday I went of long rant about home care a little long....Opinion time...It not right for tax payer to cover someone go in as a personal home care giver and the client have no responsibility for there own well being...I've seen people (client) drink so much they shit there self because there to damn drunk to function....Then there are some of them just eat sugar base foods and weigh way to much and has diabetes...because of their poor choices most of them that medicaid or medicare is picking up there insulin...I picked up insulin before and it was $300 a month and medicaid got the tab.
Sure there is those who is responsible and don't abuse the programs but what I see there far and few between.