Believe I will be pretty much starting my blog post about my sitting up my Samhain Altar. This year I am taking both Murphy and my parents major arcana cards from a tarot deck. Yes and basing it from there zodiac sign. 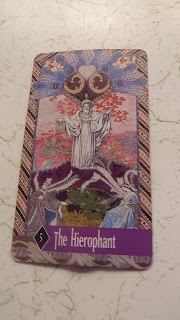 Both Murphy parents were Taurus, earth and a fixed sign. In major arcana it connected with “Hierophant” and had to look up the word to see what it meant. “Is the teacher of wisdom” and or “Who intercepts sacred mysteries and or esoteric principles”.

I never meant my mother in law. But I don't see my father in law as Hierophant or anything close to this. Although I am not questioning his knowledge or wisdom. As all of us he did have his short coming.

Two of key positive word is tradition and conventionality. Confession time...My parents had  a  different type relationship, his parents was pretty much the man was head of household. The typical 1950 and to mid 1960's. My mom was pretty much a woman libber and every so often my mother would give my dad a what ever. And Murphy said his mother never stood up to her husband. So I guess one could say that would tradition and conventionality of that time.

The two negative words is New Methods and Ignorance. When I meant my father in law his children was all grown and such, with grandchildren. I believe he was set in his way and some people are and have there own ideals, not saying there right or wrong. Just there ideals. But I surely wouldn't say he is ignored. As many of us, we might not know something but I guess we do make the choice to learn or not to learn. But I don't know if he would be uncomfortable of trying new things or not. 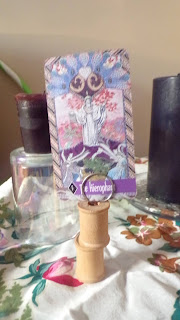 Each zodiac sign has a color to go with them. And Taurus one colors is brown.

Brown is to keep something and we know most things we don't keep. But taking care of it and it may be able to stay a longer.

Stability is word I like for the color brown. Soil is usual some tone or shade of brown. Think of all the things connect with the earth, trees, food, birds, animals, and feeling the earth soil below us, gives some of us balance.

Browns here is what usually paper sack is made of. Is a stable color and our food is connect with brown soil.

Asian culture is connect with both earth and mourning.

Latin America has a complete different look. It actual or could discourage sales. Guess one would rarely see brown packaging. It a disproving.

I have brown sweater on this evening and if I was down in South America I guess I might get some funny looks.

Middle East it color of comfort and harmony.

To make any shade of brown it pretty much any and all colors put together.

Saw both my client today. I was worried about Liz over the weekend and she talk to her doctor and there going to do a med adjustment.

Well the Covid cases are going up. For the positive cases coming back in my county here in North Idaho is just above 90%. Not good. The county of Kootenai just about a little over hour south. There county commissioners did pass a mandate. It looks like it pretty much split right down the middle now. About people wearing a mask or not.

So there people who is calling the mask mandate a form of communism and or fascism. Although I honestly seem people who thinks it the same thing. Opinion time...I don't want either one.

I live in sparsely population in Idaho, our county has about 12,000 people. Over the weekend there were 16 more cases here. And you will see people in stores with out a mask.

Because of my job I wear a mask 4 to 8 hours a day. I just don't get people who can't put on a mask for probably less and hour, to go into a store.