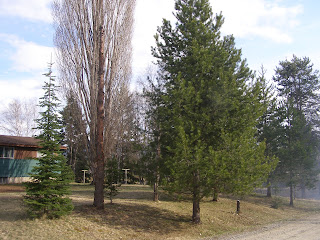 Living in North Idaho ones see a lot pine and fir trees which are green. If you notice my home is painted green 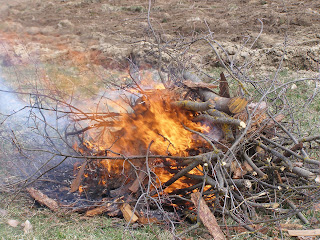 Most of this weekend we been working out in yard. One thing we been doing is burning debris. Usual there some type of wind but I would rather call it a breeze. Actual when there no breeze at all a fire can be difficult.

Next weekend photo hunt themes will be peace-tranquilty and quirky

I've start to look for a mothers of groom dress. I don't know why Murphy want me dress like I still have a perky little body. Actual it would embarrass me to dress like someone under 30, that nothing yet fell south. Statement time...Only in my wildest dreams.
But still I have no desire to dress like a bag woman either.
I would like honest second opinion how something would look nice for person of my statue and age. 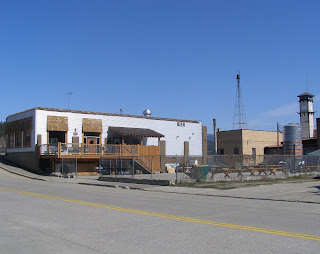 I been doing a little bit more walking. On Tuesday I take my camera and try to go some place different and take some picture(s). Last Tuesday I took Quenella in to town and as she was running her errands. I just walk around Bonners Ferry and got picture the back side of kootenai river brewing company

Last fall I planted in some bulbs that some should be showing sign of breaking though. My older daffodils have already came up. But the new ones I put in my “royal sunshine” bed nothing. Also I planted some other bulbs but it much to early to tell.
Crocus are in bloom just my purple tones. For some reason my yellow ones never did diddly squat.
I would guess my Easter hyacinth or the daffodils will be the next one to bloom.
As I been posting about flowers. I thought my red, white and blue flowerbed was a lot farther done then actual was. So I had to do some digging.
I'm starting to lean toward calling that flower bed my “flag flowerbed” but also flag is sometime also a Iris. I'll figure it out and it real doesn't matter.
Now for the fill. If we don't or can't getting anymore we now complete our goal of having water flow away from the foundation of our home.
Sure there a few place around here that could use fill.