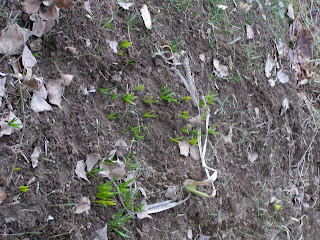 Both of us look forward to landscaping around the place. At this time there only two spot uncover of snow.
On the south side of our home which is my salad and herb garden.
Also my hodgepodge flower bed is uncovered.
So those our two beds we can landscape first.
The shot is of the hodgepodge flower bed. 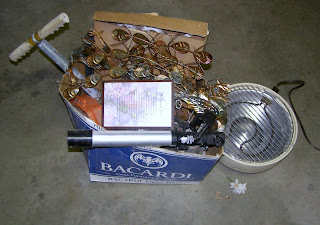 I made a promise to my self. That I wouldn't start any major project mainly cleaning until I got this shed/barn gone though. Plus organized.
This is the box of stuff that I'll be donating to thrift store.

Next weekend photo-hunt theme will be food and or minisule 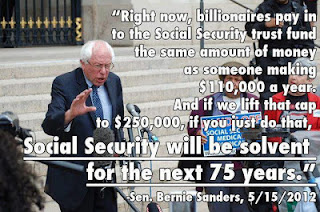 Last summer Murphy went and worked on my Aunt Eve tree farm. Hired him at eight dollar cash; one would think it would be under the table.
Middle of the season they put him as a contract worker. So we could handle the higher percentage of taxes to our income.
To the best of my figuring we will pay some where in range of 35 to 45 percentage tax wise,surprise they even pay 20% of there income in taxes.
So last evening (2/6/13) called up and wanted his social security number. So we could pay in the higher tax rate and they could use us as tax dodge.
My Aunt wonder why people don't want to work. Statement time.....It's Bull Shit like this that employers pull.
Murphy didn't hand over his number.

One thing I have to say not many on my mom side; hold grudges! This should pass.

Out where I live it was dial up for a internet connection. Wi Fi just arrived. I stop in at our local Verizon office to get the scoop on it.
There offering 4G lte at this time the equipment fee is free with a 2 year activation ….10GB “allowance” is $60 a month.
Then they also offer a data only plans and 10 GB is same price....but the equipment fee which I don't quite understand.
But after reading the small print. I have to say I'm not sure if this is such a good deal or not.