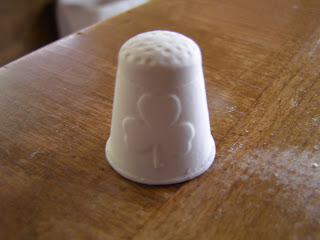 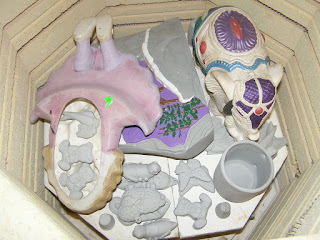 I finely got my last piece of greenware cleaned. A thimble with a clover on it. But if I took some time I could of got a few more pieces in.
They can be fired on the next round. Well before I fire the kiln coming up I need to cast up some more ceramic or purchases some bisque pieces that needs re-firing, from a thrift store.

I'd like to pour anther round of molds. The humidity has a lot to do with casting ceramics. Right now it's to wet but it would be wise to do it when high pressure returns
What happens is what happens. 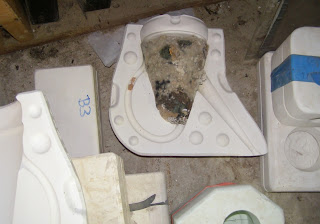 I sort of picked some different mold at random to pour. Even my watering can had a mouse nest in it. I like to pick variety of molds to cast. I got two plain mugs in this group. 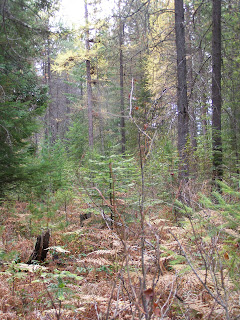 Saturday afternoon Murphy and I went out to our property on the North Bench. There was a dead ole fir that Murphy ringed earlier in the season. Which now need to be felled, could be use for firewood later on. It's green and heavy.
I figure toward the end of January it will be just burnable. Depends on the weather and what else we burn with it...it should last one to two weeks.

Got some fence post cut for our orchard. Let say we got a little over half of the corner posts done.

My friend Quenella stops over after church service she attends the Orthodox Christian Church by my place. She enjoys the fellowship there. I been to couple of there services I thought the first one was pretty and the people were nice enough. Not saying I wouldn't go back but once you attended to me it would be quite boring and it wasn't total my cup of tea.
But after the first Sunday in November she isn't going until next spring. Quenella has eye problem and really shouldn't be driving.
I even ask her what was the sermon about today...It was on doing good deeds even if it isn't fashionable

My friend Alice and I been filling in out at Joel and Candy place. The end of this month I'm out of there. It to far to drive in winter for 16 hours a week. 4 hours a day....4 days a week.


So this afternoon (Sunday) I went over to Alice home to talk to her about this week scheduled.
So I'm working out there Thursday and Friday this week.
I'll probably go out on Monday the 29th. There a chance I might work out there on Tuesday and that might be my last day, it depends if I go out and work for Ellie or not.

Plus Alice and I disused or one would even called gossip. About the distant one has to drive...”stupid medicaid can't figure that is a factor no one wants to”...Jay..Jay the dog bites and also there little dogs piss and shits in bed that Candy sleeps in.
Alice also pointed out she eats horrible and the dogs eats off the plate the same time she does.
If they lived closer I would stick it out until January when Murphy gets his first social security check.

I also found out that my old client Donna lost her caregiver. We're both wondering why. I walk out one day and she just became more and more demanding. 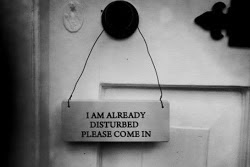 One of my reader of my blog BBC said I was an official member of “THE INSANE CHICKS SOCIETY (TICS).” I even googled the term and nothing really pop up. I'm not sure if this is to insult me or not.
I have to say I did get laugh out of it...To live in this world now one needs to be a some what insane.
It's a mad mad world out there ...I became insane, with long intervals of horrible sanity.