Ms River is once again a host for WORDS FOR WEDNESDAY and it seem I'm some what press for time and I will be only using the top section of words for a story...consternation, tourist, attached, fresh, specific, and memory.
But there others who might use bottom half, all of the words, or some type of mixture of words.

The clouds really was quite dissipated though the town of Birdton but for some odd reason most of community was a little consternation over the hanging of John McNeil a fine citizen which everyone thought.
But he cross a certain line with Yeckles of North side of big hill.


Not sure what went on between the Yeckles and John, it been said John could wapp any one in game of "Grand Trick track" but over years it was known it was best to let the Yeckles win. Simple known as sore losers.
But John know it was ok to win if you stayed in boundaries of what every.

It been while since the town of Birdton had a hanging and over something so trivia. Adds was place in local paper. And a large community event for hanging. The town was going to make money.

So it was decided the hanging would take place on August 9 a Saturday and this was when most people had a lease a pay check and hopeful a few tourist might even join in celebration.

Nothing in memory has taken place quite like this. Yes for capital offence they were public hangings. But nothing for a scrabble between two people.

A large paper up the East River got hold of the story and Dr Hoffland a psychiatrist who wrote several article about people who want to watch or being part of mutilation or someone being torched.

Dr Hoffland packed her car and in hope to find a small place to rent and be come part of this community and learn the specific of why community would want to do a public hanging.

Not long Dr Hoffland found a small two bedroom just out side of town. One bedroom which was a little large she had twin bed and a desk next to that a cabinet where she start to put her research paper from old magazine and paper clippings.

About twice a week Dr Hoffland would ride her bike to one local coffee and pastry shop. In hope to have fresh cup of brew and hope to get chance to learn some thing about the psyche of this town.

It seem all was going ok toward the hanging of John and local high school graduated about 87 people and most of these people moved on.
Crops and such were starting to harvest.

But it came first of August there was were flyers but about town asking for volunteer to build a gallows for hanging.
Maybe it was a little late notice but no takers. They move the hanging to after the fair and this time they even was willing to have a large payout for a lease six people to build the gallows.

Dr talk to local shaman and see what kind of attachment a community like Birdton would let this happen.

Editor Note...Story will continue on next time.

It's "Frozen Yogurt day"A cold dessert on what must be a very cold day for most of you reading this today!  Do you enjoy frozen yogurt?  Does it matter what the weather is?  Share with us your favorite flavor and/or topping, please!!....I love diary including yogurt but I have trouble digesting it and even leery about yogurt but I seem to handle it a little better. One my favor one is pear yogurt.

2.  What food do you know you shouldn't eat but can't help yourself? The diary is one I have horrible results. Maybe the key word for me when it comes to eating is "moderation" or staying in bounds.

3.  If your life was a meal, what kind of meal would it be? A fun not overly sweet or sour.

4.  Do you like spicy food?  Why or why not?  What is the spiciest food you have ever eaten? I like food that has season to eat, nothing flat for this gal. Ginger is one my season I like.

5.  (Most of you know I have been sick with a cold.) What food do you eat or crave when you have a bad cold?.
Chicken noodle soup and home made. But I like to nipple on saltine cracker when not feeling well

6.  Please tell us something random about your week (and maybe it will involve food). It been cold here in North Idaho. 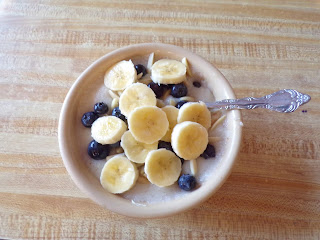