My ideal life would be work six months of the year, outside of the home. Plus make the same wages I do. Ok! A little more would be nice,
Then other half of the year have my time as a domestic goddess.

But I see all sort of crafty project people do. And I have to wonder how many actual have real jobs out side of the homes. 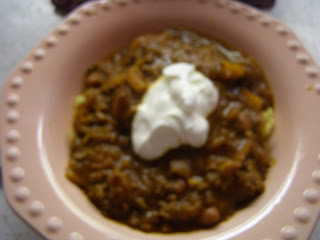 Not sure how long this would take. But I want to make a soup, stew, or chowder that start with each letter of the Alphabet.
So I'm starting with letter A. SPICED APPLE CHILI. I had this before and apple is nice touch to chili. 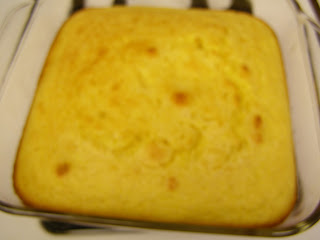 Both hubby and I like it. Well I did make some corn bread to go with it.
I ate one bowl with corn bread. I try to watch my portion. But I believe my hubby had 3 bowls. 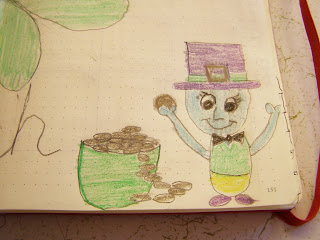 I sat up my bullet journal for the month of March. Still have to set up my weather page and step page.
This is first time I did a cover page for the month. I don't see my self doing any more cover pages at this time.
I just don't have time. 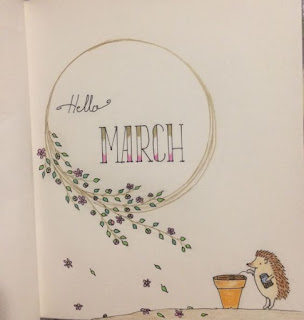 Anyhow I thought this cover page was cute.

Did mostly chores around the place with hubby help. Also hubby and I went though  automobile insurance auction.  There not quite 300 vehicles going though on Tuesday. We found 9 that we are possible interested in.
My son Bart place of employment is pretty much next door will check them out on Monday. Having one vehicle is coming an inconvenient.

Off to work tomorrow. Not sure what going on Thursday evening Regis hip complete pop out his sock and it the same one he had an operation at end of January.
So our local hospital put it back in. So I got a call and it pop out once again today. Once again a trip to the hospital and a ride in ambulance twice.
His Orthopedic surgeon is down in Sandpoint. If it goes out again and ambulance is called there to take him to Bonner General hospital main reason his Orthpedic surgeon mainly works out of Sandpoint.
I can see where this could be getting old real old