We're Stronger Then We Think

Ask Liz to take a photo of my tarot cards I made, yes my art work looks like middle grade school. But I'm doing it.
Well I thought I was pretty creative. But I saw an exercise to do with tarot cards...draw three and do write a story from these three cards...a little creative writing assignment. 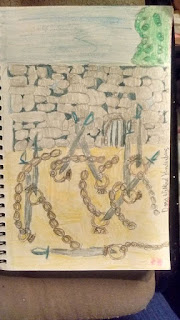 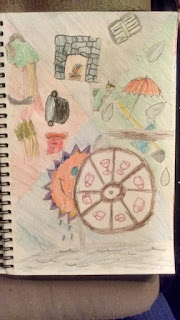 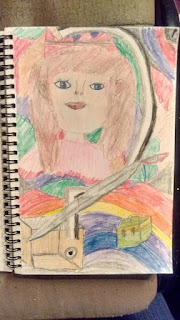 The people in Bogus had once thought everyone should be same and even personality should be the same. So they thought every one should look a like. Everyone whore Olive green from head to toe. And even wore Olive tint glasses and all the world looked the same. But everyone chain that was tethered with a invisible chain as they went thought life. Although it might been seen but some chain was longer then others. But one thing if you look as people move around with there chains some had and easier time moving then others.
But the key was found to un-locked the shackles and push up the gate. No one in Bogus even knew there was mill of life. People had different way of seeing the world.
But soon that everyone had a part to play to make the mill wheel turn. And everyone part has equal importance even if it all isn't the same
Since the people of Bogas took off the chains and start to ask question and wonder about things in there life and the world it self. They have became stronger in so many ways.

I knew I did a story once before basic on there cards. Then anther time I start a short stories life Bogus. Simple fact I don't recall people or place name in the stories.

Now back to reality of life. Murphy and I did some home improvement, trying to winterize around the doors. Well the side door went fairly easy but when it came to the front door complete anther story.
Weigh in was dispointed, trying and it struggle about keeping on track of loosing weight. I got book on blood type diet. I don't know if one eats by your blood type makes any difference or not.