One May Not Choose To Live As One Does 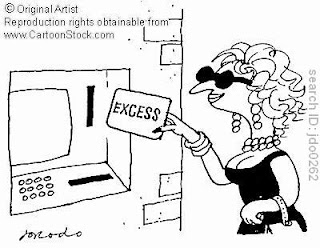 It's my call in all honesty I need and want this to be my last post. Come right down to it I don't like any ill feeling toward anyone.
Confession time....I'm almost as pissed off at my Aunt Eve as I once with my brother in-law Earl.
I'm not going into the details about Earl it happen so many years ago. Eve and Earl pretty much did the same stunt but for different reasons.
Now for my Aunt Eve. I believe that she see us as “indigent” right down and out. Which is farther from the truth.
In the kindness of her heart she offered Murphy a job at $8.00 an hour; weeding and she said it was “under the table” then after the fact she want Murphy social security number; so she could properly send us a 1099 and get her self a tax break. So we can handle our own taxes. She was assuming we didn't file because we're part of the 47%.
One time she ask me if the company I do home care though “took any deductions” and I said “No and I pay them so I can get my bonus” I know may Aunt heard me say “I claim it” because she replied “you do” with a surprising sound in her voice, but some how it never sunk the part about my bonus didn't hit home.
Maybe the lady a little bit hyper and has trouble on what other says and it real doesn't sink in.
Opinion time...I believe she though we didn't pay taxes and send us a 1099 would do no warm to us....Confession time...If it wasn't for the home care company bonus, the 1099 wouldn't be an issue.
She should of said “ the job pays $8.00 and we will be send out a 1099” A lease I wouldn't of lost my respect for her.
Statement time...I don't think Murphy would of done it for $8.00 if he knew he was going to receive a 1099....Confession time...I'm pretty sure that I wouldn't of...Opinion time...If someone going to pay someone under the table and use a 1099 they ought to start the wage at $9.05 an hour.

See Murphy and I don't believe in heavily supporting Imperialism Capitalism  not saying at all we aren't consumers, if we said “We aren't consumer, I would be lying”
We don't choice high life consumption but more of a simple life. But that doesn't mean we want to be exploit. 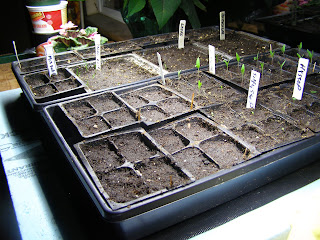 It's gardening time for us and yet we're not in the full swing of things. But I have started some seeds. We got some Stupice and Early Girl Tomatoes. Two types of peppers mixture of hot peppers and Jimmy Nardello which is a sweet frying pepper.
Talon Onions, leeks and, artichokes.
Then for herbs we started some hyssop (anise) and Siam Basil. 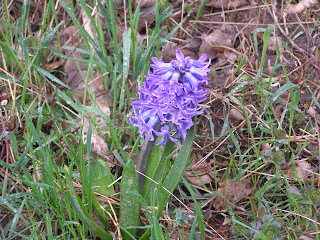 The Easter Hyacinth is early this year. Last year it bloom around the 20th of April. Last year I split
an bulbs order with Qunella which I planted last fall (2012)
It seem like everyday something new is bursting though the soil. Some what excited to see what I've planted look like
Now some of my tulips are starting show buds on them. Still it going to be while until they show any color.
I notice I have one small fritillia in bloom.
I split up one of my lavender out of the herb bed. Put two chunks of lavender in royal sunshine flowerbed.


Murphy dug up a tree and move it to the south side of our home. Don't worry I helped.

Murphette is pretty much move in her place. Still things need to be put away which is a pain. I've hardly move in my life.
Counting the hospital move when I was born. I've moved 10 times I believe so on average I move every five and third years.

I finely got the box of ceramic sorted and organize. Which means I can move on to anther shelf. But it look like right off the bat, I'll need Murphy help moving two of his box so I can get back to the boxes in the back.
As I was going though the ceramic box I ran into an old news letter I use to put out. Confession time ….I do miss doing ceramic. 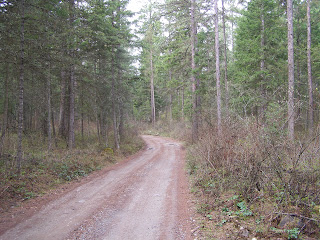 We went and visit Qunella up on Katka Mountain. This here is the start of the road as one would turn off the county road 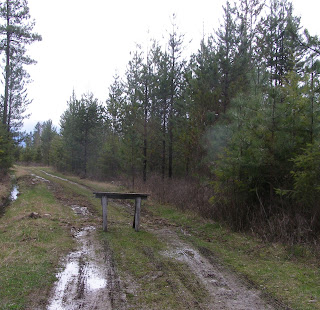 Still one can't drive into her place. Beginning the first of the week (April 14 to 20th) she getting four loads of gravel
Like a gardener I like to some what compare how thing are coming along in her garden.

It look like she a little head of me but not that much. I still want to get a piece of her yellow rose. She promise me some of her larger fritillia which I'll put under my front window.