As part of my last weekend photo hunt was also the theme of “sport” as we're fishing notice there were a lot of foot prints on the bank of the Kootenai river. 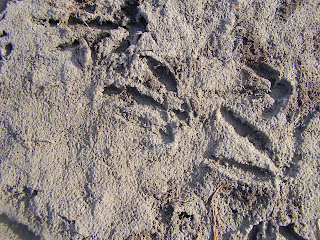 There were some geese print. 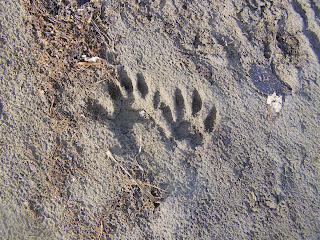 There were racoons print. 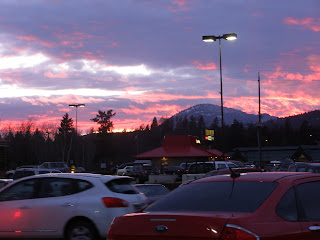 A week ago (3/8/13) I was waiting out side of the pick up for Murphette and Murphy to come out of the dollar tree.
Some one said “look at that sunset” and she started to take pictures. I got my camera out of the vehicle and took some picture.
Then as I was taking my picture I notice other people taking pictures too.
(We where at the Bonner Mall in Ponderay, by Sandpoint)

Not saying much exciting happen. Turn in our taxes paper to the account. Last summer my husband went and weed my Aunt Eve tree farm.
Sort of Curios what going to happen with our taxes since she lied and told both of us, that the pay is under the table. Turn around and send us a 1099 form.
Then she advice my husband to throw the 1099 in trash once we got. Because we don't file and pay taxes according to my Aunt Eve.
Opinion time...she doesn't think much of other people....I don't think much lairs or cheaters.
For a short time I won't know what will happen to our taxes.

Not all sure who will be showing up. I will show up to the sign of medical marijuana petition, on April 6 at the Northwood Tavern in Naples. Those who are against marijuana I fine Confession time...their reason is sadly but funny usually.
Anyhow I rather take care of someone who uses marijuana as part of there treatment; instead of those who total rely on narcotics.

I been doing a little better on my health. Been out doing some walks and not eating as much in line of junk food.

Murphy is almost done putting the fill around the place.
Weeded out the strawberries. Still waiting for some crocus to bloom, there up.
I'm starting to wonder if I planted any snow drops are not.
Friends of mine has both snowdrops and crocus in bloom.
Actual we figure out where the fence for the orchard will be place. In front of the main garden I believe the size will be 30 feet by 60 feet.
Best thing that the blue bird have returned.
Coffee is on.