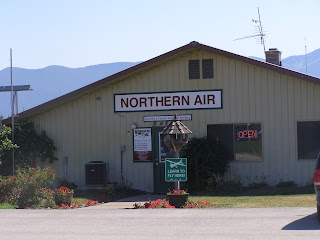 Actual transportion isn't big thing here. What I'm talking about is public transportation. There no train station in Bonners Ferry any one who wants to get on a train has to in to Sandpoint. Then the train comes though at unfriendly hours like around midnight and 2:30 AM. If that isn't bad enough it doesn't come in everyday.
To fly any where usual one would have to Spokane. But we do have an airport for some rich person to have an toy airplane (real one)
This is our airport it north of Bonners Ferry. Once in while someone in leer jet will land but usual it prop plane that use our airport. 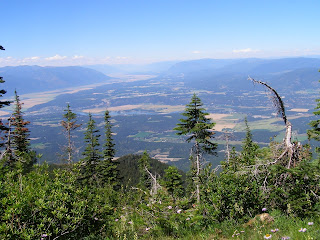 I would of been a numb skull, if I forgot my camera. Last Sunday the 5th of August Murphy and I hiked up to the top of Clifty peak.
Your looking up North though the Kootenai Valley. Toward Canada.
To far Left and the buttom part of the picture would be the area which I live in.
The town of Bonners Ferry is still on the left hand side but it right by the Kootenai River.
Then you head toward the right is up on a buff, my friend Quenella lives which is Katka.
Then farther to the right is the town of Moyie Springs.

Next weekend photo hunt will be can and or http://gattina-keyholepictures.blogspot.com/ I can't get the word to link.