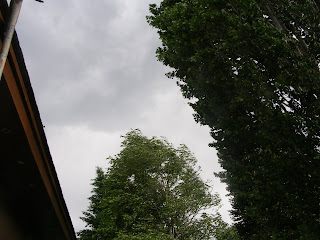 The weather went from clear to a major wind storm that came blowing thought yesterday.
Our large poplar tree in front sure bend and swayed in the wind. So I went and got some picture of top of the trees.
It was reported that in town of Bonners Ferry there was gust of 54 miles an hour.
I have niece who lives in Moyie Spring, which is East of Bonners Ferry that the skirting around her trailer blew off.
I understood there are some fires started out there yesterday and the highway in that area had to be close down. 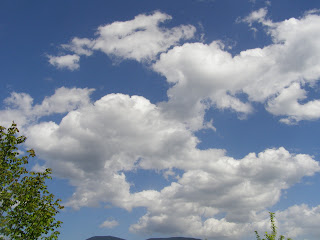 When I got up in the morning the sky didn’t have a cloud in a mid morning they started to devolved and just kept getting bigger though out the day.
So to me this cloud form looks like a little doggie

I decided to do an extra meme called Friday Feast

When was the last time you had your hair cut/trimmed?
I would guess about 2 months ago

Soup
Name one thing you miss about being a child.
around with my arm out and thinking that I was an air plane and I thought if I ran fast enough I would take off

Main Course
If you could learn another language, which one would you pick, and why?
French mainly because I have French in me from my dad side.

Finish this sentence: In 5 years I expect to be… not doing home care and doing my crafts mainly ceramics.