I know it getting late in the day but it still Sunday here in North Idaho.
So that means it Green Thumb Sunday and we talk about gardening or nature.
Well this time mine leans more toward nature side.
Feverish thoughts blog is the one who puts on green thumb Sunday

Murphy and I got up at 4:30 this morning to go Huckleberry picking before the heat came 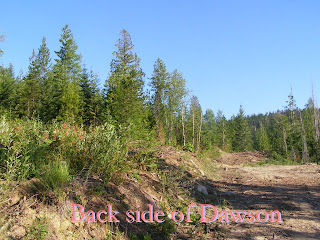 Our first place we went up the Moyie River Road towards Backside of Dawson ridge. It was hit and miss but nothing steep 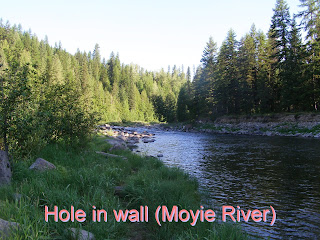 Then we head toward the Hole in wall area of the Moyie River. Murphy thought the last skid trail would have berries but the one before had the berries and it was all flat still not great picking. 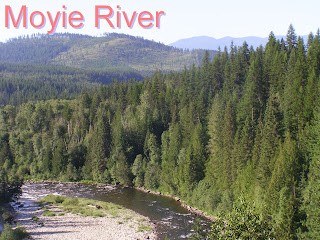 But we thought we could the next turn off was anther way down to the river but it dead end with step hill side and few trees for road barrier.
But I thought it was a great place to take a picture of the Moyie River. 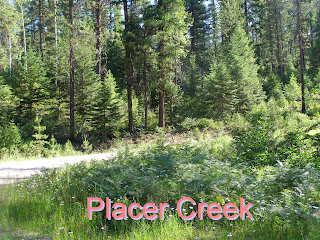 Then we head towards placer creek and at first we thought we was going to bat zero and I decided to hike up the hill toward the birch tree and see if there was any between the road and tree.
There was some and I called down to Murphy and said right before the tamrack to the left there was some and he got them.
But little later on he head over the hill on the right and start to pick in that area.
So I also went in that area and had to follow his voice and very quickly found him. They were quite a few berries but on the small side.
The berries were located on fairly steep hillside full of brush.
I was wondering how soon I was going to miss step and go tumbling down the hill.
I was thinking oh I wouldn’t do any thing like that unless my bucket was full. 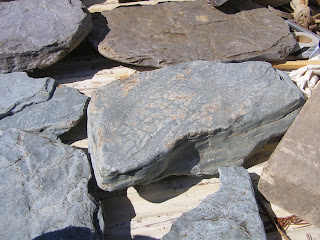 Murphy went down a head of me and the creek was dry bed and he said there looked like some bluish slate in the creek bed and I looked down and saw some pieces and finish picking that bush.
Took my huckleberries and dump them in box and went back to the creek bed.
Well I don’t recall the number we haul up.
But I know there were a few heavy one that we took up the hill.
One of them was fairly heavy and I thought I was going to pass out and I had to sit down and breathe deeply.
We thought some rope with a pulley might me the ticket next time