I did have of my housework and I said heck with it and decided to drive up on Katka Mountain to visit Quenella and Earl this afternoon and as I was driving into town the other gas station was up to $3.50 a gallon. I’ll get gas Friday.
Quenella made some sweet rolls with bran and something else. We visit about different stuff.
I kind of want to know if they went a talk to our local prosecuting attorney about their dog “Britney” who got poisoned and died.
They have a very strong hunch who did.
Anyhow this person went around and falsely stilling timber off there last. Neither one of them are in shape to steel timber
But on a better note all of her crourus was sure blooming beautiful. 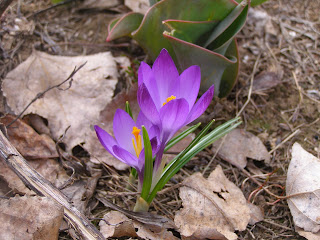 My crous (spelling???) are starting to bloom in my “royal sunshine” flowerbed
I don’t have that many crous but they’ll spread out eventually.
I’m not sure what will bloom after in that bed.
But I checked out my hodgepodge flowerbed and I would guess my daffodils would be the first flower to bloom.
Now over in my patriotic flowerbed your guess is good as mine.
Lot of item in there is sure poking up 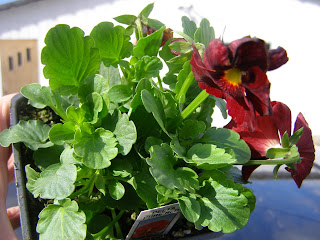 After I got done visiting up on Katka. I stopped at BTC and grabbed a few items out of there “Ok, I did pay for them”
I picked up a roast beef there now on sale at $1.87 a pound I got a 2.76-pound roast and got it baking.
Before I went up to see Quenella and Earl I clean out the fridge I don’t like tossing things that could be used.
I had a dub of sweet French dressing and teriyaki sesame ginger barbeque sauce and I put that over the entire roast and stuck it in over at 350

As I was in the store over by the deli I saw this person and I wasn’t sure at first who it was and it was one of my second cousin Denise who I didn’t at first recognized and was she said “Hello” I knew who it was then
Denise was a little on pudgy side when she was a child. And I myself was the opposite when I was younger.
She was standing with Doug.
I can’t prove anything but Denise looked like “hell” Most of her top front teeth was missing she had a little sliver of one left.
If I was going to guess she had been doing too much crank.
I did crank ages ago but I never got into it that heavy and I still got all my teeth and there in good and strong.

BTC just started to put out there gardening supplies and I bought a deep red pansy in a four inch pot for $1.19 and will later plant it my patriotic flowerbed.
This morning it was spitting snow but none of stuck