I end up getting my words over at ELEPHANT CHILD and this time I decided to use odd number ones 1, 3, 5 and such
Solitude, Toes, knocking, Reel, Perfume, and Squad

Several of Reels were empty. It was becoming some what hard and frustrating to do up quilts. Aunt Harriet who done tons of quilts for all of local school children when they enter kindergarten.
Had been having a hard time getting in Glade which is town south any how the town of Lanner to the north is half the distant but they don't have much in line of supplies.

A couple of nights ago there were a yellow object floating about in the cottage and Aunt Harriet always had visitor of wraith quite often. Not sure why but she had a way of making people feel welcome.
One such wraith floating about and had moved on. Was wearing some light perfume which she didn't recognize. But she want to get a smell close to it.
But she was quite up set when that one wraith stop by and kept knocking over items. Not sure if was drunk ghost. But she expect her visiting ghost to behave civilly and she end up telling the ghost to leave.

Since quilting was put on back burning she decided to clean out the lower cabinets as she was cleaning and scrubbing and some how possible broke her toe. Aunt Harriet was never one to go to the doctor. She had always question the term "practicing medicine"

Things calm down and look like Tuesday of next week she would be able to go down to Glade. She recently got a new app called squad on her phone, which now help to keep track of fabrics. So she could match them up better with other fabric and match things up a lot better. Plus she was getting a little tired of having a solitude life the friendly ghost were fine, but she need other than her friendly ghost.

Ms Terri our host for WEDNESDAY MELODY have once  again came up with some wonderful question, base from "Paper Clips"

1.  Wow!  Had you ever heard of the Holocaust project involving paperclips?  It is a great teaching project, for sure!  No I haven't heard of the paperclip project, a wonderful way of bring up issue of prejudice.

2.  Have you ever created a paperclip chain?  How long did it get? Recently our weight lost group, T.O.P.S divided up to teams and had a contest using paper clips for a motivation to loose weight. So each weight lost you add a paper clip and if you gain you lost. So at end of six weeks the one with longest paper clip got around of applause.

3.  I use paperclips as hooks at Christmas time to put ornaments on the tree.  Works like a charm!! What is something you used a paperclip for, other than holding papers together? Paper clips are quite multi usable and I have used them in quilting. I found some cool things to do with PAPER CLIPS

4.  I am amazed at the shapes and colors of paperclips available.  I found my favorite... share your favorite with us here! I have to say I wouldn't know which shape I would get. I would get variety box

5.  Say goodbye to May on this last Wednesday of May.  Be poetic if you will, or simply bid it adieu.  May had blessings and now it time to move on til June.

6.   Tell us something about your week so far, please! Been organize my fabrics by color and size. And I don't know why but I'm working on my facebook ADDICTION I have other social media accounts like Instagram that doesn't get my feathers in hackle. 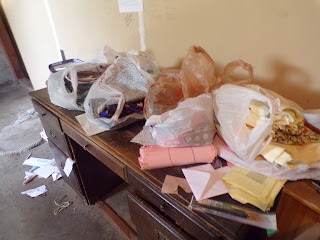