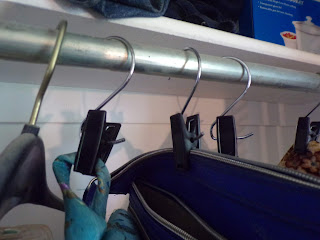 Been trying to figure how to organize my purse. Well I did change my purse. But I got these single clip hanger things. It gets up and off the table. But it takes up a lot of room.
Confession time...Just got to much stuff.

Well got your bi yearly letter from Medicaid for personal care givers. Well won't bother you with every little detail of it.
Statement time....there is a difference between institutional care and taking care of someone in there home.
But medicaid has it set up and looks at everyone  the same. And all of medicaid clientele have exactly the same needs.

Trying to figure out how I can mark off my list and give my self credit of things that I accomplished. One thing I know I do is procrastinate. I say to my self. Well I have this thought like...I only did three things I will wait and mark it off and then when comes to that time. And I still have the thought of later.
I need to come up with a plan. Let say regardless how much I do I need to mark it off and give my self credit.

Friday I was pretty much beat from work and I made up next week bullet journal, May 19 to 25. Like I said I need to make sure I give my self credit and then it will be a good habit.

Started to read Centennial Health....The Secrets of  Creativity and I found this statement some what thought provoking..."We Judge creativity by the magnitude of the response evokes"
One of very first creativity time was telling stories around the campfire during the cave dwellers.
Can see this after a great hunt or gathering. Sit around the fire sharing how ones day went with a few cool adjectives to make more interesting. Or lease your life might sound not as hum drum and boring.
"Insights percolate in the brain before they pop into conscious mind"
The word percolate means to be put though a sieve.
There was brief quiz in the book and it covered 5 areas of mind and creativity. Extroversion, Agreeableness, Conscientious, Emotional Stability, and Openness.
On all five area I was in middle. Not saying I scored exactly same but it was in middle range.

Do you recall the game called KING OF THE HILL I played. But now the metaphor and Hierarchy. Pecking order in life.
Question time...Compare to game of king of the hill where do you like to be in present time? I like to be about two thirds up the hill.
At the button you get dirt and crap toss at you.
On the very top someone(s) is trying to push you down.