Most of or I should say a lease I have wish I could snap my figure and make thing change. I did make my quarter goal of weight lost. But I want to or need to loose anther five pounds the second quarter of the year.
I'm slowly sneaking back up. And it needs to stop.

Took Regis to the library in Sandpoint and for some reason his DVD he check out. Came up missing. I could swear I took them out to my car.
Well for some reason they never made it back to library.
The people I take care get $785 a month. Although they do have some subsiding housing and food. Regis only pays $179 for rent and receives I believe is $104 in food stamps.
And also he on medicaid and medicare for his medical, which helps him pay for his medicines.
So we went to library to make things right. So to help Regis pay for the missing DVD I would pay for half or them.
We talk the library and found out what would cost to replace the DVD. I paid my half and next month he will pay his part, which is under $45.

We stop at walmart and did a little shopping. I got a gift bag to put Claudia gift bag to put her clothing I got her for her birthday.
Then some wrapping paper to wrap her gift with. I find it amazing or shocking what they charge for papers. 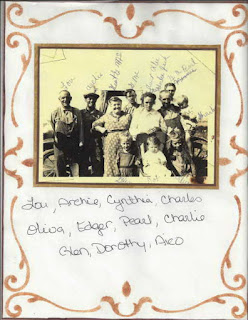 The other day I was doing a little family history research. Some one posted this photo of my great grand ma Cynthia. My grandparents are Edgar and Olive. This photo they only had 3 children and will have 9 more. Alice will be come my Aunt which I never would met. She was killed in car accident a year before I was born. Glen and Charlie became my uncle. Charlie was called Buck and he was a fan of the comic strip BUCK ROGERS.
The picture was taken in Kanasa

Coffee is on
Posted by peppylady (Dora) at 9:27 PM