Where Is The Devil 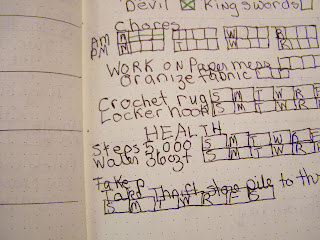 Every hear the saying "Give the Devil his due" well I just finish up anther week. And notice I hardly kept track of anything in my bullet journal.
Let see, I finish anther tarot card never mark it off.
Each week in my bullet journal I have a place for chores. For each day of the week I put in 3 squares to mark off. Both in AM and PM.
I didn't mark one off. I know I did chores around the place.
I'm trying to work on rugs I start for Christmas and same thing as chore one. Not a mark.
Statement time...I need to give my self credit. It seem like I'm scared to give my self my own due.

Today I meant with my pagan group Spairfitera and we been going thought a book called "To Ride A Silver broom Stick.
And we cover a few of the pagan denomination or sects.
I tend to lean toward ECLECTIC PAGAN
But one person did there on HEREDITARY WITCH CRAFT and I know families who basically follow the same religious path. My husband side been Catholic for generation and if they married a non Catholic there spouse was expect to be come Catholic.
Well my hubby generation (baby boomers) was properly the first to step out of the mold.
My side when it comes to family history and it's religious path. We're diverse when it comes to faiths.
Just the other day I found a group of my family had connection to the DUTCH REFORM
Being from a diverse group of religions I can some what under stand why I may use different paths.
That saying "The path is narrow for one faiths"...Opinion the path is wide and one should be able to grow with there faith....There more then one way to worship there deity.
Well each of us is going to do a report on a certain moon. Since I was born in Feb I'm covering the snow or the hunger moon.
But each planet also have moon and some even multi. Being born under the sign of Aquarius and which connect to Uranus and it has 27 moons. There largest moon is Titania and is charter in one Shakespeare play " Midnight summer dream and she queen of the fairy.
The smaller moon Trinculo which was recently discovered. Still from one Shakespeare plays THE TEMPEST and the part was the DRUNKARD JESTER.

Work day and off to Sandpoint.

Coffee is on
Posted by peppylady (Dora) at 8:23 PM