I enjoy blogging. To  me it sort of like recording history. I often wonder in the future what others will think of our times.
I know some have an easier time in life and other don't.

My local weight chapter of T.O.P.S and the one out of Sandpoint is putting on our fall rally. Usual there about 80 people comes. All from North Idaho.
Two members from my group and I are in charge of games. Confession time...I wish I could come up with something other then bingo...I should been on this earlier.
But I'm changing it up a bit. Instead of regular bingo. It's being called "Have You Every and Get To Know You"
Bingo has 25 squares on the card and 75 numbers.
So when people arrive at the rally they will be handed a blank bingo card and they fill out the blanks to the question that obtain to them, with matching number.
Here example some of questions.
1) Felt happy in last 48 hours? which is #9
2) Been bullied? Which is #2
3) Done the twist? Which is #3
4) Over weight by 25 pounds? #22
5) Born in the 1950's? #37
There 45 question and some will and won't obtain to everyone.
At T.O.P.S meeting tomorrow we will give it a test run.

Trying to up date my new lap top. It my third trying. One time when I was moving it I accidentally shut it off. But it seem it taking long then it should.
I have hunch I'm doing something wrong. 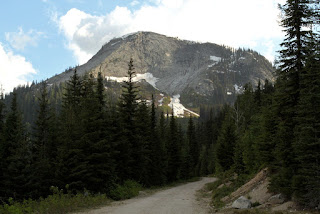 Yesterday Murphy and I went for a drive up in to the mountains. Had a great view of MYRTLE TURTLE and got some good photos, saying with finger cross.
But I'm on the older lap top as the newer one is being up-dated.
As we were there I start to crochet a loose knit dish cloth. Murphy does most of the dishes since I'm working and we prefers a loose weave when it comes to dish cloth.

Murphy and I came to conclusion the garden is much to big. One thing I learn on job is one can't change something 100% simple because most of us our creature of habit.
So we will be decreasing the garden by 10 to 25%.
Anyhow when I go though things and de-clutter. I only get rid of 10% to 25% at time.
Couple of years I ago I went though under the stairs and the shelves out the shed/barn the first 10% went to the thrift stores.
Then I went back though the items and I was going to have a yard sale the other 10% or so of the items.
Life been busy and I'm just going to donate what I had plan for a yard sale.

It end of the month and my assign hours for the month is coming to an end. Liz is aloud 64 hours a month which is about 15 hours a week. She has 5 hours remaining. Regis get now 69 hours in month and they increase his hours mid month. So now he has 17 hours a week. Well for last part of this month we has 8 hours.

Now got pack my lunch and head into town. I have a few things to take care of before I go over to Regis.
1) Get an appointment to have my car service
2) Get change for Regis
3) Make copies for the bingo game
4) Go to the bank

I believe I will be ready for work.