Not Going To Announce.

I've shaken my head about how we handle our foreign policies though out the world. As I'm far from an expert.
But I have some common sense and under stand human nature, most of the time.
As I'm not sure bombing Syria is right thing to do or not. They've done it for years, attacked there own people with nasty chemicals.
When some being abuse by someone or a group. One needs to be rescued and if no one comes and rescued the one who getting abused. Soon two are guilty...The one who is doing the abuse and the one who sits by and does nothing.
But I have to question the reason why...Are we doing this because we care about the people of Syria or for some other reason.
There been other human abuse though out the world and United States never did a thing. For simple reason the other countries had no or lack of natural resource. 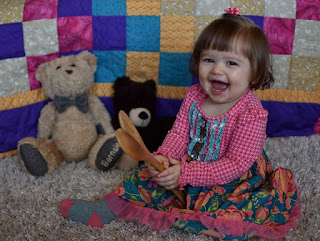 Good News...Miss Claudia, grand daughter is now one year old. And we will be going over to Montana to celebrate her birthday.


Finish up the week and did a little bit around the place. I'll get to that in a bit.
But now Abner the cat is start to little hunting in field by our place. Ziggy is pretty much just stare out the window at birds. Once in while he will get excited.


Still looking for funds for MS DAISY But remember I'm not total looking for a free ride...I can now match each donation up to $50 and each pay day I put in $20, pay every other week.

Work was all that long, just finish up the week. Two hours today. So I came home and did a little around the place.
Clean off our dinning room table. It seem like there a big magnet on it. Or quite bit of it.
Then took care of some fabrics. Had 3 bags of strips for my locker hook project, condense it all into 1 bag. Took some of the large pieces and put them in tote. Start a pile of some smaller pieces of fabric and also Murphy older shirts that could be cut into strips for a locker hook project.
Got all the fabric in one bag what I've been using for the quilt I'm making.
Good thing is I found my yarn needles. I got the fabric tucked in on the one side on the locker hook rug I'm working on.

Things been sliding and tumbling apart, roads that is. This last winter we had plenty of snow and it all went away at rapid rate. I 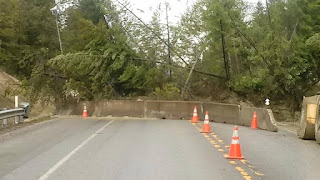 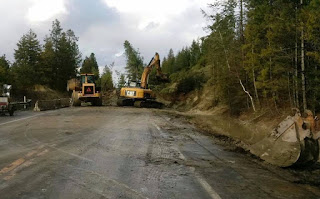 The highway 95 went a little while ago. But this isn't the first time this slide
For a while they had one lane traffic. The crew who been keeping the traffic moving safely about.
Once the weather and soil stable I don't think much can be done.

I want to show a photo down by one of my cousin place. It took out drain pipe, and now looks like the other drain pipe which is put in.
When the road clasp it took out some people water line.

Last thing Murphy went to the doctor his hip and back is bothering him. Gave him some muscle relaxers. But I believe he should have an x ray. This isn't the first time he seen a doctor about this.
His blood pressure was up a bit. Not sure if it do to pain or what. He goes back in 30 days.