Now Is It A Before or After Thought 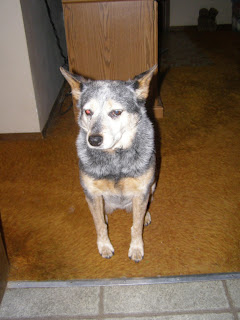 I post yesterday a few photos of Boo. My grand puppy-dog. Right now she in a contest and trying to raise fund for Southern Oregon Humane.
Plus she top model for Bandana Bootique.
So since yesterday was Boo day to shine on blog.
Today is Daisy day to shine. She likes the weekend so there a little more time I can toss an item for her today.
Also yesterday I got a photo of her, sitting so pretty.
Anyone who interested in purchase a bandana for there furry friend. Donated to Southern Oregon Humane. Vote for Boo. Or give to Daisy teeth cleaning.
All the  links are on YESTERDAY POST 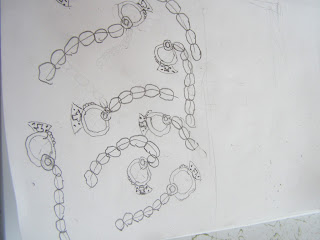 Start to sketch the eight of swords. In tarot deck which means restriction. At this point I have 8 chains hook to a cuff. But in each cuff I'm going to put in a sword
Not sure where I will put the eight keys for the cuff lock. We can un and lock up things in our life, both physical, mental, emotionally and spiritually.


Been doing some locker hooking, a rug. Got most of aqua done. Working in middle can cause one hands to cramp up.
Next color I believe I will move on to is the coral.

Ready for the quilting class which start Monday over in Troy. I got a call from the instructor and I am in.
But my friend Alice at this point haven't heard anything. But I thought the way they communicate could use some improvement.
But if Alice isn't in. It not financially feasible, with out splitting the fuel cost. Flatly I just won't do it.

Been checking out the flight to Medford Oregon. I would rather fly into PORTLAND then SEATTLE
The only thing I can figure something big is going on in Portland. The flight into Portland been pretty much full. Not to Seattle. Seattle air port to me is confusing.
We're planning to visit Sawyer and Betty the weekend of the 4th of March.

It snow a bit today which I'm not happy about. The snow is sunk down to 3 feet.