I thought I would post something great for samhains-sirensgive away. Actual there two of them so just go back and click on link.
I like “zucchini “ bread but didn't get a chance to make any. But I've never tried with pineapples and so I thought I would share the recipes from Samahian Siren.
Pineapple Zucchini Bread
3 cups all-purpose flour
2 tsps baking soda
1 tsp salt
1/4 tsp baking powder
1 1/2 tsps ground cinnamon
2 cups white sugar
1 cup vegetable oil
3 eggs
3/4 tsp vanilla extract
2 cups shredded zucchini
1 (8 ounce) can crushed pineapple, well drained
1 cup raisins
1 cup chopped walnuts
Preheat an oven to 325*  Line the bottom of two 9×5-inch loaf pans with parchment paper.
Mix flour, baking soda, salt, baking powder, and cinnamon in a bowl. Beat sugar, vegetable oil, eggs, and vanilla extract together in a large mixing bowl, and stir in zucchini and pineapple. Gradually pour in the flour mixture, mixing until just incorporated. Fold in raisins and walnuts, mixing to evenly combine. Divide batter evenly between the two prepared loaf pans.

Bake in the preheated oven until a toothpick inserted into the center comes out clean, about 1 hour. Working with one loaf at a time, hold the pan on its side and gently tap the sides of the pan against the counter to loosen it. Cover the pan with a cooling rack, and invert it to tip the cake out of the pan and onto the rack. Peel off the parchment paper, and allow bread to cool completely. 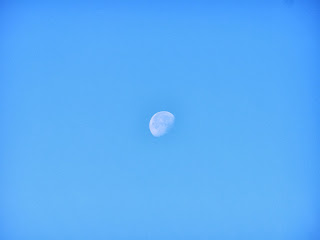 Murphy and I went up in the mountain today. Usual we take the saw just in case we run into some firewood. It's not like we have enough firewood. Plus we also have natural gas and electric heat.
First thing right by the split to either go up Myrtle or Burton. There was a young mule deer buck with five does. Not very often you would see a spike with that many does. Most of the time when a buck is that young Usual the older buck with massive alters runs guys like the spike off. He sure most be one lucky spike buck. Question time...Wondering were the older mule deers was...wondering about the health of mule deer population.
Well I had may camera in bag and didn't get a picture of the mule deers. But I thought the moon was sure pretty up against the blue sky in Selkirk mountains. 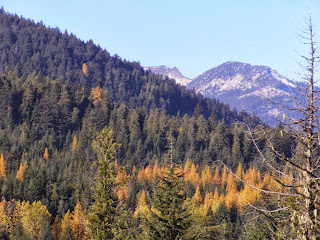 Some company put in a new logging road and with gate on it. But it gave one a different look toward “Myrtle Peak”. Murphy and I didn't walk down the road to see were it went. But it has been in that long. We go up in that area quite a bit.
Myrtle creek is were the city of Bonners Ferry gets there water from. Lets just hope they didn't log next to the city water source. Confession time...Not sure how far I was from the actual from creek it self 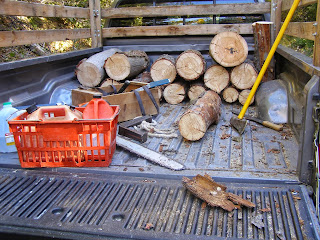 Murphy has his little spot up on Myrtle creek area that he likes and usual we come out pretty good. This is our first little part of our firewood. Usual we like getting larch or red fir. I've taking a liking to vine maple. But older we get we're always considering how easy is it going to be to get out. Somany years or one may say as time really pass bye. We're not quite there yet. We want the wood to just jump in and even do a song and dance number. We're even willing to take nice clean pine.
This load was fairly easy going. The load after this one the wood was heavier. The larch died recently and it was still wet. Won't be used this year needs to season. 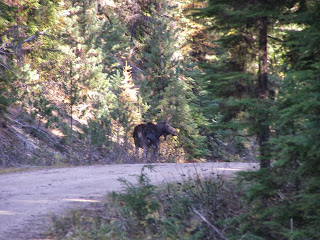 On the way back we saw a cow moose. This time I did have my camera ready. She just walk a little bit up the road and turn and went up in woods. 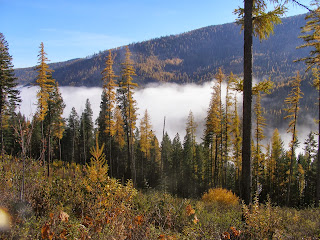 The valley been full of foggy last few days. Once you got above the clouds in mountain it was actual fairly warm. I didn't have coat on I wore a long sleeve shirt. Wore a stocking hat for two reason it hunting season and my ears every so ofter will get sore. Being in Mountain getting firewood ones need not to worry about fashion.