It Some Were In This Dang Computer.

I had my post all written out for this weekend photo hunt. Guess What I can't fine my picture I took for stir or figurines 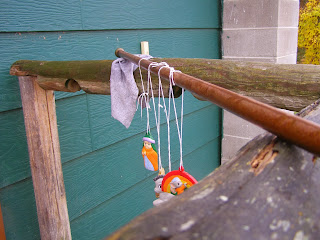 Once bisque is painted using acrylics it needs to be sealed. I found out hanging the ornaments using a flag pole and laying it across the rail so far been the best. Not saying there isn't a better way.
I'm trying to get some greenware cleaned and loaded in to my kiln, so it can be fired. 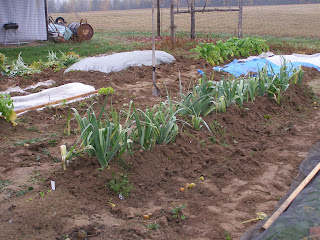 We cover up some areas of the garden. The leaves you see sort of in middle are leeks; which been healed in.
Loose covered up the radishes, turnips and spinach. Knowing there is a strong possibility we need to get into them.
The artichokes didn't make it. Ran out of growing season. So we cut them back and covered them with leaves. Tucked a tarp around them all snuggled. Even a few years back we had so many artichokes we even got tired of them.
It the fathers one way with dirt tucked around it tightly. Or closes one to the fence by the shed/barn.

We went out to Murphy Aunt Shirley place up on North Bench. Look around since there moving down south.
I posted about the gas range. We're taking it for $75 dollars. But they were so busy moving things about. Best thing we could do was just get out of the way. So we didn't take the range but Murphy sister Faith has the key to the place.
We did come home with an lazy boy chair, paid $40 for it.

Like most people who picks up there odds and end but not everything from second hand and thrift stores nothing matches.

Coffee is on
Posted by peppylady (Dora) at 6:48 PM