Hold On To What Every.


Yesterday Someone was up set with my post. Like I care. I used the “N” word. Being a “N” don't mean a dang think do to with the color of your skin. When someone treats you with out respect or a lower class citizen. There treating you like a “N”.
I wasn't using the “N” as racial slur

I found out possible my hours might be double. The people I take care of had there hours increase. I didn't go right home from work. I stop over at my friend LaWalla and chit chad for bit. Actual longer then I want to.
The way my client talk I'll be getting in anther 2 hours a week. So I'll be helping them out about 4 to 6 hours week.
I had a good visit with my friend. One of her friends came and visit her from Vancouver Washington and they went up to Nelson British Columbia and United States Customs at Port-hill pulled a gun on them and they got worst then the third degree.
Haven't been to Canada for ages but it seem like when I came though; for some reason I didn't impress them. Even once I got ask if I was carrying heroin on me. Statement time...what dumb question

A little later on I'll call my friend Alice up to see she will be home around ten until a little bit after ten-thirty. Nine until ten I have my T.O.P.S meeting. But I'll have a little bit of time to kill.
The client she now is in a nursing home with congested heart failure and will be there for a while. Last time I talk to Alice she was going to call up the company we both work. To see if there was anyone available. If no one is available she then was going to start calling some other home care agency. Some pays pretty poorly, $7.25 an hour.
Depending on what one did a lease were we work our hourly wage average out $11.50 an hour.
I know Murphette could use a caregiver but like most she won't get that many hours and I'm going to suggest her to Alice. Statement time...Murphette isn't that hard to take care of
Hopeful she found work.

It been such a lovely fall. Me out gallivanting sure don't get things done around here. There a few flowers and bulbs I like to move around.
I been still stab along on my pillow cases and my ceramics. In ceramic line I got three ornaments going. One of the kings and a donkey to a nativity. Then also a mouse painting a rainbow; which the only thing needs to be done is backwash and sealed.
The other two things is a little squirrel and a teddy bear magnet. 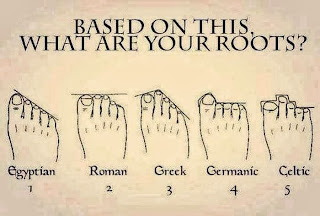 Someone post this on facebook and I thought it was interesting. My toes aren't anything to the extreme
I would lean more to the Celtic with possible a little Roman and Egyptian.

Coffee is on
Posted by peppylady (Dora) at 7:00 PM