Heads Up It Going Well 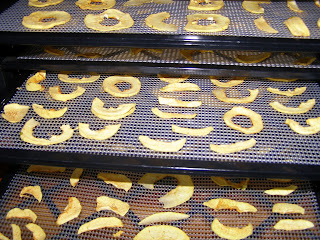 I thought I got enough apples to dehydrate and make a pie. I want to try an apple and ricotta cheese pie. I only picked up enough to dehydrate.
Our local food bank has what they call salvaging any one can go in weekly. Get odds and ends know one know what is being offered.
I know Denni is a the food bank. Not sure if she is an employed or volunteers.
She was the one who gave me they heads up on the apples.
The sad truth I went on Wednesday and for some reason they were closed. We were willing to give them radishes.
I'm starting to wonder what radishes would be liked dehydrated

Can't say these apples was the greatest. But they seem to dehydrate nicely and actual sweeten up.

I took Quenella down to Sandpoint she had to see the eye doctor. I believe it was 6 months ago she had a cataract removed. But the eye is starting to develop one.
We did some shopping. We went to four season nursery out in Ponderay. That's where Quenella picked up some summer and winter squash. Then we stop at the good will I tried on 2 tops and one looked funky; the other one didn't fit.
Picked up a few fired bisque pieces. But Quenella made quite the haul.
My main reason to go in wall mart and pick up my self a lap top. I want the $348 HP my main reason for choose that one, AMD processor. Sooner of later one will come in.
At walmart she got her self a dark blue pot to put a plant in it.
Our last stop was Big R Quenella end up buying the big ticket item. She got a Husqvarna with a Honda Engine.
The only thing I picked up was some lawn feed and four foot bamboo steaks 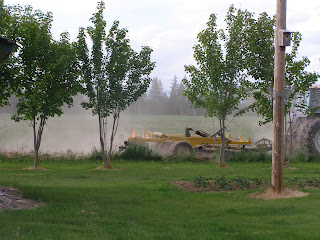 Finely there getting around plowing field. The old hay field behind our home. Last year we had a long fall, so last November the field was turn over once.
I thought they would have been plowing before now.
Statement time...I was wondering if it was going to be neglected get full of averse weeds....but my real concern is what and how much chemical would been needed to take care of any averse.
Not a big fan of the dust.
I like watching the one vulture dive and scavenging out in the field. Editor Note...Once in while they will be two vultures. The garden in the last thing we planted was some squash. Still there going to be a little more planting. Once the spinach is done in that spot we will put in some green beans.
So here are what's in each roll
Roll one...Peppers, French Melons, summer squash radishes, and carrots.
Roll two...Peppers, eggplant, tomtillos, spinach, artichokes, pear tomatoes, spaghetti squash and summer squash.
Roll three...Carrots, Chard, basil, lettuce, bee balm and Minnesota Red Potatoes
Roll four... Beets, fennel, and Minnesota Red Potatoes
Roll five...Tomatoes, and corn
Roll six... Talon Onions, leeks and corn.
Roll seven..Tomatoes, and corn.
Roll eight..Red onions, white onions, Quenella onions, shallots, lettuce, and arugula.
On the south side I have some red raspberries and strawberries.