Does This Have Any Warrant To Our Gun Violence 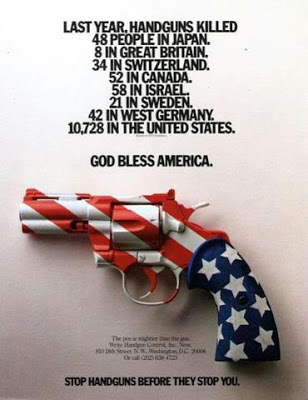 Couple of things I've don't recall every posting anything real heavy about abortion or guns. The killing of these children in Connecticut is one evil person.
I can imagine and empathy for those who lost love ones in such a tragedy.
Back and forth there been debate on gun control. I live in an area where a lot people are worried about their gun rights.
It might even be call that some in my area have a gun fetish.
I know some of your statement will be guns don't kill people..people kills people yes this is true but why do these countries have lower violence in there communities.
Statement time....I have no major thing for or against guns...I surely never felt like owning one for self protection at this time in my life...Our guns are for hunting ....Once in blue moon I don't mine doing some target practice, bullets are expensive....I surely wouldn't get a loan or spend a large percentage of our income on any gun...I don't pick a candidate if their pro gun or not.

If you notice we have the highest number of people killed with guns. But even if we had gun control I wonder if there some underlying condition that needs to be addressed.
Such as what in our food chain...I see so much this at work the people I take care of lives on packages (junk) foods Opinion time... is full of toxic chemicals.
It seem like most of the clients takes enough medication, in the long haul of things, how is this effecting them.
Let just say if they had tighter control on our guns and still live in a toxic life style. Question time...I wonder if there would be the same number of killings but a different method.

I took a few minute and googled cancer rate by countries to compare cancer and gun violence but so far no luck.

Email ThisBlogThis!Share to TwitterShare to FacebookShare to Pinterest
Labels: political, well being