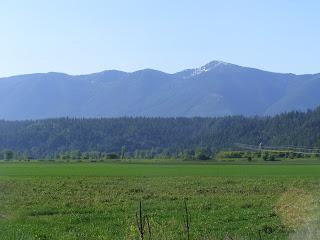 part of my job is walk Donna dog Rex and this morning we headed down to ball park area in dist 2.
The mountain in background is Clifty and it still has snow and that’s strange for this time of year.
I was on stiff side so I was moving pretty slow and Rex kept looking back at me and wondering why I wasn’t moving at a faster pace. 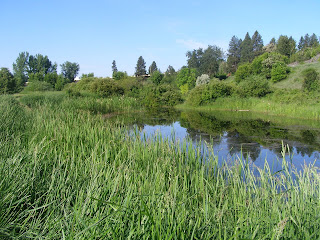 Sense the grass wasn’t wet and he already went poop I decided to walk over to the ponds in back of park hoping to get a glace at turtle or something but nothing.
The birds was sure chirping during my walk

Well we got her bedroom pretty well done I think and it looks real good. Only if our place looked all that good

Before I head to work I mange to get 3 chores done in morning and 3 chores when I get home the ones in evening are pretty light ones.
Then after dinner I sit the timer for 15 minutes and do some type of chores around the place

Well after work Bart and I went and talk to the insurance agency.
Bart want to know why his Toyota Terrell was $315 for 6 months.
Then his pick up he isn’t driving so we took that off of the policy.
Sawyer pick-up had this knocking noise and he thought he put a rod though it but he took off the oil pan and didn’t see any metal piece in oil pan.
Now he thinks it might be something else.
I talk to him and he told me what it might be but I don’t recall.
But also he looks for a dodge diesel 6 banger pick-up for the line of work he does.
His cousin Sam and him have been doing these small contactor jobs that just takes less then 3 days to do.
The bigger companies don’t want to handle it.
And his F150 real is limit on what he can and can’t do.
Well he got rid of his bike and he got 700 cash and wooden canoe.
I guess he done with motorcycle for while. His little cousin who is Sam son got this little put put go cart and he won’t even get on it